The Stranger, the birth of absurdity in two acts 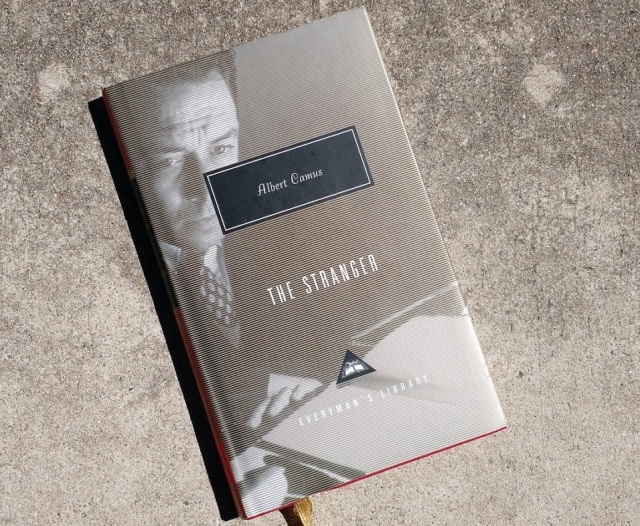 It’s been about a month but I’ve returned. I always return.

I have also returned and revisited this book which I’ve read quite a while ago without frankly understanding any of it. A great deal of things have changed since then and so did my perception of the book. Although it was written before 1984, in a different language and in a distinct style, I claim there is a slight continuation of the topic. The plot is very simple: a man visits a town for the funeral of his mother and gets involved in a homicide. What makes it engaging is the first person narration with an apparent emotionless and detached commentary -neither though the aloofness of a cold-blooded professional killer nor a sociopath. It is temping to consider the anti-hero the latter but I would insist on maintaining the adjective the author chose – The stranger.

So how do I see the connection with 1984? Well, finishing the 3rd level of torture Winston Smith suffered in Orwell’s universe became Meursault  in Camus’s book having no first name, no age, no physical characteristic). He was indeed the perfect stranger. He was the prototype of a man deprived of substantial emotions. He couldn’t even remember if his mother death was today or the day before. He could only feel the heat of the sun and the humidity of the room. I honestly admit it is hard to conceive that such condition is possible and not just a figure of speech. However, if you need further proof on how this is achievable go back again to 1984.

The second part of the novel was the trial and imprisonment. All the wait and build-up descriptions of the preliminary part come together in the court where the stranger is judged for being so strange to himself. The conviction was not in the end given for the murder of an “Arab” , it was about his lack of empathy to his mother’s death, his carelessness toward the social issues surrounding him, his indifference of what makes a body a person. I couldn’t understand this initially, this behavior appeared too absurd, too far-fetched. I needed to see some strangers in real life. I needed to become somewhat a stranger myself by asking the question “What would happen if I stopped caring?”. Now we have a potential answer thanks to Camus.

One last note worth mentioning is the final monologue of the protagonist in his cell awaiting for his execution after the priest’s vain visit. Here we witness a transformed Meursault declaring with unprecedented indignation:

“It was as if that great rush of anger had washed me clean, emptied me of hope, and, gazing up at the dark sky spangled with its signs and stars, for the first time, the first, I laid my heart open to the benign indifference of the universe. To feel it so like myself, indeed, so brotherly, made me realize that I’d been happy, and that I was happy still. For all to be accomplished, for me to feel less lonely, all that remained to hope was that on the day of my execution there should be a huge crowd of spectators and that they should greet me with howls of execration.”

PS: for an excellent review by a friend in Greek follow this link.

Logical stories of everyday madness
View all posts by Απολύτως Διαλλακτικός →
This entry was posted in Books, English. Bookmark the permalink.

5 Responses to The Stranger, the birth of absurdity in two acts