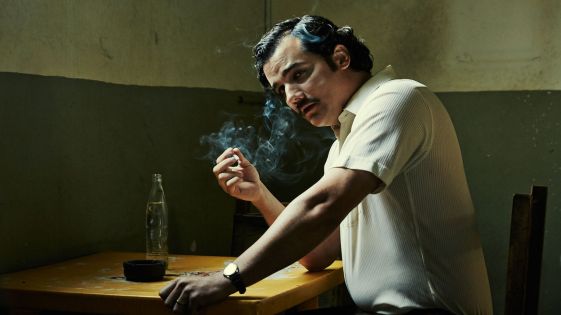 “You might be Walter White cool, but you can’t be Pablo Escobar cool”. Man, I didn’t know that I would get addicted so easily to those drug related series.

There it is: a series dedicated to the real life events of Escobar, one of the biggest drug lords of all time. The setting is in Colombia of the early 80s were most of the operations took place. I sincerely admired the commitment of the director to preserve the nature of this figure and found a talented actor that could deliver it in Spanish. It is always somewhat awkward when this element is surpassed for the sake of character-viewer communication. Another aspect that contributed to my amazement is the narration. I unequivocally proclaim that a narrator is an integral part of every fascinating story and the current one is matching perfectly my expectations. He provides a perspective that simultaneously engaging and uncaring. To my mind this is a remarkable achievement that only a few have accomplished.

I don’t want to spoil anything (don’t read wiki), therefore I will just mention that the plot is naturally about the rise Escobar’s immense kartel and his pioneering vision of first-time smuggling of cocaine to Miami. Initially there were only two cops dealing with this issue. Nevertheless, since one of them was a US agent the subject soon evolved into a international case, the fight against the Narcos.

Logical stories of everyday madness
View all posts by Απολύτως Διαλλακτικός →
This entry was posted in English, Pictures. Bookmark the permalink.